India’s car market is one of the fastest-growing in the world, with annual sales having doubled from 1.4 million to more than 3 million over the past decade. At the same time, vehicles contribute a sizeable share of India’s high levels of air pollution, particularly in cities.

In recent years, India has altered its vehicle tax policy numerous times. The current policy varies vehicle tax by size, with tax decreasing by vehicle size. This project seeks to evaluate the effects of this tax structure on air pollution, social welfare, and market structure in order to understand the implications for optimal tax policy.

The car sales in India grew from about 20,000 per month in 1992 to 200,000 per month in 2012. That is, the market grew by a factor of 10 in 20 years. Such rapid growth implies that studying India’s car market is important for addressing both local air pollution as well as greenhouse gas emissions for the global climate change.

First, the policy may have induced consumers to purchase relatively smaller cars, which potentially led to reduction in air pollution. Second, the policy might have induced progressive income re-distribution given poorer households are more likely to own smaller cars. Finally, this policy might have affected market competition because it changed the incentives for car manufacturers to choose their optimal decisions on designating their cars.

For the empirical research design, this project exploits tax rules and historical tax changes in India.

First, the Indian government introduced a new car tax in 2006 that had a lower tax rate for smaller cars (car smaller than 4 meters) than larger cars. This policy created a condition that allows author to conduct a bunching analysis for cross-sectional data to examine how automakers and consumers responded to tax incentives.

Second, Indian federal government’s car tax had time-series variation that varied by car segment. Author shows some of the time­‐series variation in Figure 1 and exploits this variation over time and between segments to conduct a difference­‐in­‐differences analysis. 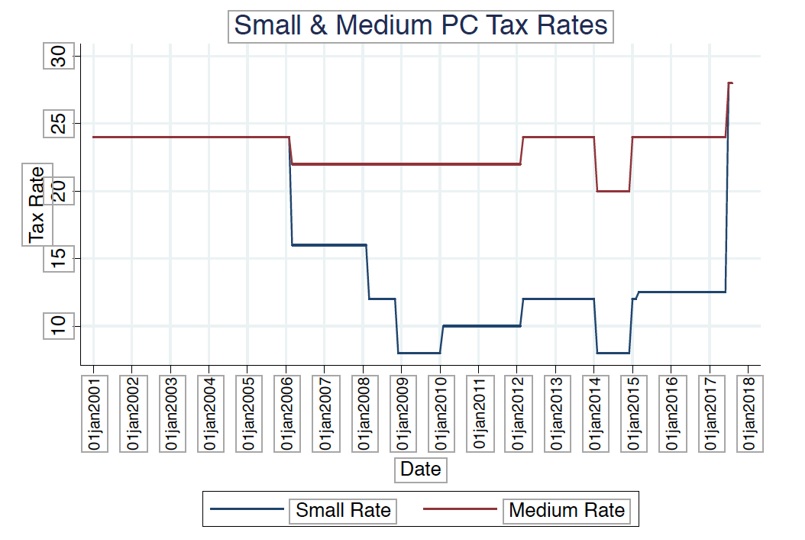 The advantage of the research design is the ability to use these two complementary estimation methods. The bunching method gives large variation in tax and enables visually transparent analysis. The difference­‐in­‐differences method, on the other hand, provides a way to examine the policy impact for broader segments of the Indian car market and investing medium long­‐run effects of the tax policies.

As the first step to examine the effect of the size-based car tax policy in India, the author collected automobile specification data for 1995 to 2018. Following are some preliminary findings from the analysis.

Figure 2: Number of cars sold in India before and after the policy change

In ongoing analysis, this research is examining impacts of the downsizing effect. First, this study is testing if this impact resulted in substantial reductions in fuel consumption. Second, the author is exploring if the policy compromised the safety of cars. Third, investigation continues to understand if the policy affected higher- and lower-income households differently. Finally, this study aims to know if India’s policy has affected automobile markets in other countries through multinational firms.

Tata Centre for Development at UChicago