As countries around the world race to develop a coronavirus vaccine, there is another, everyday killer causing billions of people to lead shorter and sicker lives: air pollution. New data from the AQLI, which converts particulate air pollution into its impact on life expectancy, reveals that particulate pollution was the greatest risk to human health before COVID-19. And without strong and sustained public policy, it will be after COVID-19.

According to the AQLI, particulate pollution in India has sharply increased by 42 percent over the last two decades. Today, 84 percent of people in India live in areas that exceed the country’s own air quality standards and the entire population is exposed to levels that exceed the WHO guideline. As a result, the average resident sees their life cut short by more than 5 years relative to what it would be if the WHO guideline was met; more than 2 years if the national standard was met. 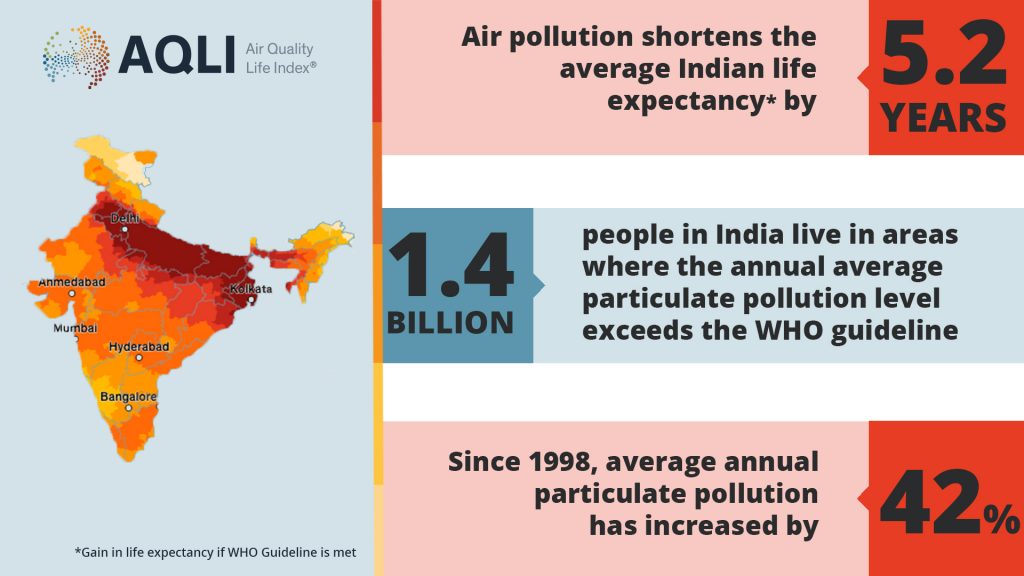 “Though the threat of coronavirus is grave and deserves every bit of the attention it is receiving—perhaps more in some places—embracing the seriousness of air pollution with a similar vigor would allow billions of people around the world to lead longer and healthier lives,” says Michael Greenstone, the Milton Friedman Distinguished Service Professor in Economics and creator of the AQLI along with colleagues at the Energy Policy Institute at the University of Chicago (EPIC). “The reality is, no shot in the arm will alleviate air pollution. For a country like India, the solution lies in robust public policy. The AQLI tells citizens and policymakers how particulate pollution is affecting them and their communities and can be used to measure the benefits of policies to reduce pollution.”

New findings from the AQLI also indicate that citizens in states like Bihar and West Bengal can add more than 7 years to their life if air quality met the WHO guideline. Residents in Haryana can expect to live 8 years longer if the WHO guideline was achieved.

In 2019, the central government declared a “war on pollution” and announced the National Clean Air Programme (NCAP) to reduce particulate pollution by 20-30 percent relative to 2017 levels by 2024. Though the NCAP’s goals are nonbinding, if India does achieve and sustain this reduction, it would lead to remarkable health improvements, according to the AQLI. A nationwide reduction of 25 percent—the midpoint of the NCAP’s target—would increase India’s national life expectancy by 1.6 years, and by 3.1 years for residents of Delhi.

The state governments in India have already been working proactively towards improving air quality. A case in point is the world’s first emissions trading system (ETS) for particulate pollution, where researchers from the University of Chicago along with others are working closely with the Gujarat Pollution Control Board. The ongoing pilot in Surat aims to reduce particulate pollution generated by industrial plants while cutting costs.

“History is full of examples of how strong policies can reduce pollution, lengthening the lives of residents,” says Greenstone. “There is a very real opportunity for leaders in India and across South Asia to become the next success story as they work to balance the dual goals of economic growth and environmental quality.  The success of the Surat ETS suggests that flexible market-based approaches can allow for making progress on both goals at once.”