Economic development consumes natural capital like forests, fisheries, water, and clean air. This depletion is usually not accounted for when measuring a country’s growth. How does policy geared towards the use of common resources balance environmental depletion with economic growth?

India faces a stark example of this trade-off with respect to the groundwater commons. An ever-growing number of farmers have taken up groundwater irrigation. Access to cheap water using electric pumps has allowed farmers in many areas to crop much more intensively, combining better seeds with more water to increase their yields and profits (Chakravarti 1973, Murgai 1999, Murgai et al. 2001). This intensification of agriculture has been a boon to farmers’ livelihoods, but is rapidly depleting groundwater reserves. Over the last decade or more, groundwater levels have declined faster in Northwestern India and Pakistan than in any other part of the world (Famiglietti 2014). The rate of groundwater use in large parts of India is far beyond sustainable levels (Figure 1). 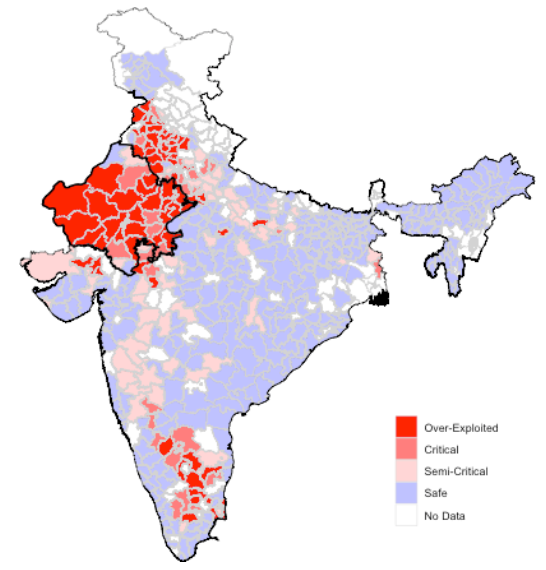 Note: The figure shows the rate of groundwater exploitation by district, as classified by the Central Groundwater Board, Government of India.

The story of poverty reduction in India has therefore been written in part through the depletion of the groundwater commons. As the water table declines, it becomes more and more difficult for farmers to get water to the surface. There is a real chance that continued groundwater depletion will throw agricultural progress into reverse.

The consensus on current groundwater policy is that it has wildly exacerbated the groundwater commons problem….