Almost two months into the Delhi lockdown, mostly poor and non-migrant workers in Delhi have seen their incomes and working days drop by at least 57% and 73%, respectively, researchers at the University of Chicago and the University of British Columbia have found. By early-May, 9 out of 10 survey respondents were stating that their weekly income had fallen to zero.

Despite this unprecedented job loss, the study finds widespread compliance with public health directives. Compared to levels before the arrival of COVID-19, mask usage rose from 20% (during the air pollution season) to 90%; time spent indoors increased from 44% to 95%, and regular handwashing rose from 88% to 98%.

“Even for non-migrant workers in Delhi, the lockdown has been devastating economically. But it also brought about a massive change in behavior. People started wearing masks more, they stayed indoors and socialized less, they washed their hands more regularly, there were even fewer reports of smoking. These habits are crucial for limiting the spread and the health impacts of the virus,” said Dr. Ken Lee, Executive Director of the Energy Policy Institute at the University of Chicago in India (EPIC India) and the lead author of the study. “A big question we have right now is whether these positive behaviors can persist once the lockdown is lifted, even as fear and media coverage of COVID-19 begin to subside.”

The researchers point to the role of extreme fear and media coverage in driving these unprecedented behavioral changes. Throughout the lockdown, 80% of people reported feeling extremely concerned about COVID-19. To demonstrate the unparalleled media coverage of COVID-19, the researchers use Twitter data to show that since March 25, COVID-19 coverage has accounted for more than 56% of all media coverage.

Dr. Lee adds, “For this particular group of mostly non-migrant workers in Delhi, we have not yet seen alarming changes in rates of hunger, access to health care, scarcity, or security. A lot of people reported benefiting from the Delhi government’s food assistance program. That said, the latest projections expect a surge in infections in the coming months, and so the government should prepare itself to rapidly expand these types of assistance programs.”

In addition, the study notes that there are relatively high rates of mental and emotional well-being problems, ongoing challenges in food supply chains, in terms of higher prices and lower quantities, and dwindling levels of reported savings.

The study uses data collected from 1,392 non-migrant workers, many of whom live in Delhi’s informal settlements. The data was collected in 2018, 2019, and during the lockdown, between March 27 and May 13. The national lockdown, which began on March 25 and is scheduled to be lifted on May 17, had a drastic effect on movement in Delhi. Using Facebook mobility data, the study also shows that intra-city movement dropped by 80% percent, immediately following the Janata curfew, where it remained through early-May. 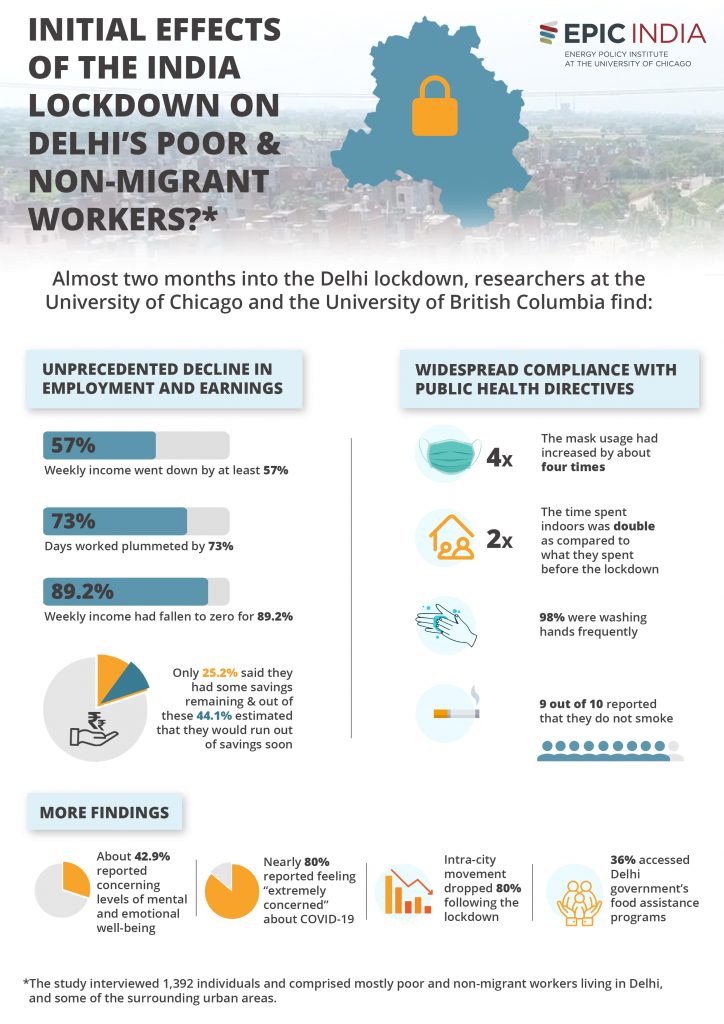 Here is a quick video recap of the major findings